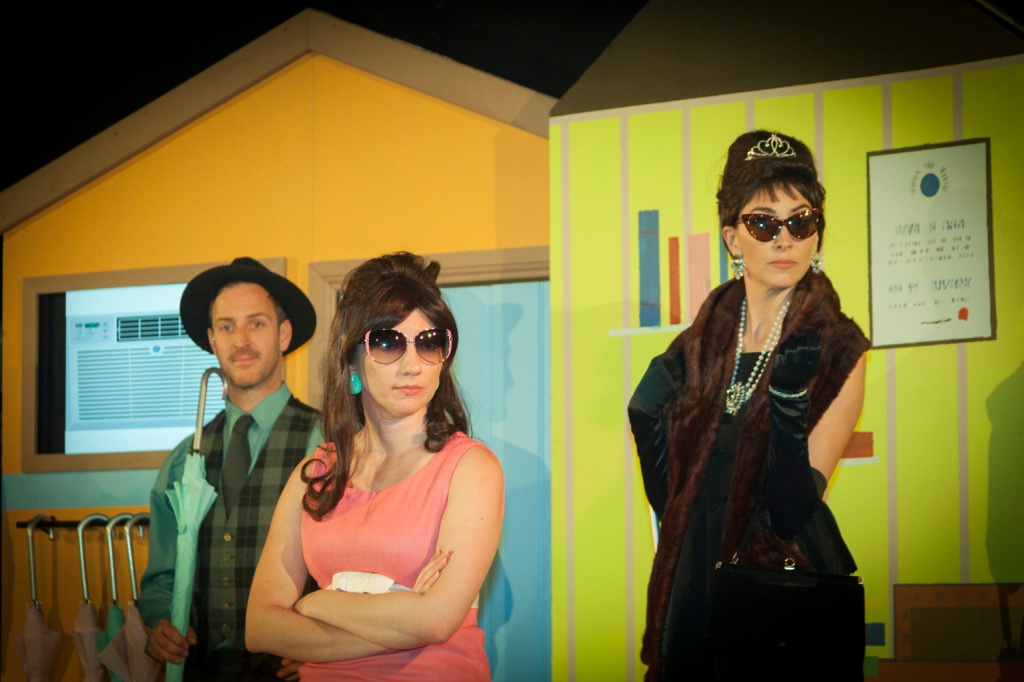 A Note from writer/director NOEL ANDERSON – Welcome to ‘Audrey Hepburn and I Consider Our Assets’ online souvenir program. The program features a full synopsis and links to nearly all 14 original songs. It’s been ten years since I directed the one-act play of AHAICOA at Chapel Off Chapel. It ran just under an hour and had no music score. Today it is a full-length musical. Over that time a lot of people have been part of Audrey’s journey. We currently have approx. 1600 followers on Facebook and our official music video ‘Travellers in Time’ has had 12,000 views on YouTube. It’s been a helluva ride, we’ve had our share of heartbreak too but there’s been affection along the way also, particularly from social media. No love though from the Aussie cultural institutions, but we had a little ‘ financial assistance’ from Bendigo Bank for our first production in the Melba Spiegeltent a few years back. Audrey’s themes are topical, growing up, family, falling out of love, and mental health. I know if everyone got to know ‘Audrey Hepburn the musical,’ and we could find a ‘bloody big-time producer,’ they’d love her just as much as our leading lady ‘Liz O’Sullivan’ from suburban Melbourne does. Curtain up, light the lights and enjoy the online souvenir program 😎

Audrey Hepburn and I Consider Our Assets – Full Synopsis with Song Links
ACT 1.

Overture Brighton Beach Melbourne, Yesterday – Liz O’Sullivan sits glancing out on a beach full of colourful bathing boxes. She laments I Believe in PINK with Audrey Hepburn her imaginary friend, about growing up a woman in Australia and dreams of being a Hollywood star, loved by everyone. Her fiancée, Len from Collingwood, arrives with Liz’s family and they try to persuade her to accept Len’s hand in marriage. Liz cracks under the pressure of everyone watching and waiting for her to answer, so Liz’s father pays for Liz to go to therapy for a year. Watching me

Liz meets her therapist Rod, who has the looks of a movie star. During her first therapy session, Liz is constantly interrupted by voices in her head, one of them is Audrey Hepburn, who behaves like one of the characters from her famous movies – ‘My Fair Lady, A Roman Holiday and Breakfast at Tiffany’s.’  Rod wonders just how many voices are actually inside Liz’s mind. Millions Of People Like You  Liz confesses that marriage frightens her to death and that she had a breakdown when her ex-boyfriend, Emad an Egyptian prince, left her after their engagement.

Liz blames her mother and father for her current mindset, as they have a ‘compulsive unhealthy obsession’ with Hollywood and movie stars. Mum is obsessed with Elizabeth Taylor and dad is wild about screen legend, Audrey Hepburn. The perfect woman. Liz believes her parents are both cuckoo!

So, with pen and diary in hand, Liz decides she’ll try and get to the bottom of what makes her family tick, and starts recording everything they say. Mum tells Liz, woman to woman, she married her father because he was the best looking boy at the local dance. Liz can’t believe what she is hearing. Women don’t marry just for looks, do they? Sadie’s Dance

At home, Liz constantly listens to her parents bickering over dinner about who is the most beautiful woman on TV. Is it  Elizabeth Taylor or Audrey Hepburn? Liz calls this dinner table conversation ‘The Beauty Debate’. (WHEN BEAUTY DOMINATES THE HEART) Will Liz ever be as beautiful as these Hollywood stars?

Dad tells Liz that her mother could have been a movie star like Audrey Hepburn…if only things had been different for them. Hollywood Movie Stars  Liz wonders why things have to change in relationships?

At her Catholic school, Liz is given the lead role of Eliza Doolittle, a role made famous by Audrey Hepburn in the Hollywood film ‘My Fair Lady’. At rehearsals, Liz starts behaving more like a diva every minute, insisting on changing the lines from the play, which makes her unpopular with the teachers.

Liz’s body is maturing, embarrassed by her developing breasts and she develops a crush on her teacher, Mr Conway.  Liz’s mum tells her she looks like Natalie Wood in Westside Story, even though she doesn’t. Excited that she is beautiful, Liz dresses up for her birthday dinner with her father and stepmother Caroline, but Liz’s fantasy comes crashing down to earth when her father starts criticizing the outfit she is wearing, telling her she looks like a Mexican gunslinger from an old Orson Well’s movie.

Back in therapy, Liz has developed strong feelings for Rod which frustrates her imaginary friend, Audrey Hepburn. Liz dreams of dancing with Rod dressed up as a Southern Belle from an old 1930s movie. The dream turns into a nightmare, as one by one Liz’s ex-partners confront her, and line up to dance.

Liz wakes from the nightmare and spies Rod alone in his office. She learns he has an obsession as crazy as her family’s obsession with beauty and Hollywood stars. Rod is obsessed with matinee idol Rock Hudson and is probably gay. Liz discovers that his office cupboard is lined with hundreds of pictures of the movie star.

Liz laments the trouble she is having committing to marriage with Len, and finding a ‘real man’ in modern Melbourne. Feeling he has let Liz down, Rod asks her to dance with him and together they ponder where all the real men are hiding. A Real Man

Overture Reprise – Liz awakes in Rod’s arms, back in therapy.  She must have passed out. She confesses to Rod that her ex-fiancée, Emad, couldn’t commit to her and something cracked inside her head. (EMAD’S DANCE) Emad invites Liz for a coffee, Len gets jealous and Liz panics, thinking her only true friend, Audrey Hepburn, has disappeared from her mind, forever.  But, Audrey returns, warning Liz to never to trust a wild thing… her therapist, Rod.

On Brighton Beach with Rod, Liz produces a long list of names. She tells Rod these they are men she has slept with, confessing that she usually ends her relationships. Emad’s leaving, left her feeling unattractive, and made her feel less of a woman. As Liz is about to leave, Rod drops a bombshell, suggesting she sees the movie The Three Faces of Eve, a film about a girl with multiple personalities. Puzzled, Liz leaves Rod’s office feeling frightened and alone. Emotions

During lunch, Caroline (wicked stepmother from Coburg) turns up unexpectedly at the shoe shop in Melbourne Central, where Liz works. She wants to get to ease the tension between them, after all, they are family. (HEELS) When Liz’s mother arrives unannounced, they try to encourage Liz to use all her womanly charms get what she wants in life, to marry Len before she grows old and becomes invisible to the opposite sex. Make The Most Of What You’ve Got

Liz is horrified by the thought of compromising just to fit into a man’s world.  Mum hurries to dress, she’s late for a date with a young man she met on the internet. Audrey Hepburn sits watching the scene unfold like a 1940’s screwball comedy, excited that mum had the guts to cruise the internet.  Things spiral out of control when Caroline declares she is pregnant to Liz’s father and Emad gatecrashes the house, proudly announces he is in fact mum’s internet date…and they’re off to see Now Voyager at the Astor Cinema. On hearing this, Liz fears she’ll fall apart and reminds Emad that Now Voyager is one of their favourite Bette Davis films. Liz is left alone with her imaginary friend Audrey Hepburn, together they ponder the meaning of love. Audrey Hepburn tells Liz to just accept life, unconditionally. Traveller in Time .

Liz decides to take up a job offer in Perth for a new theatre company and starts making plans to leave Melbourne. Len warns her that there is nothing in Perth for him, and he won’t go. They fight over her decision and Len’s constant critiquing of what Liz wears and how she looks. Len reminds Liz that she is not a star, she is not Audrey Hepburn, and that this isn’t just about marriage, in fact she can’t commit to anything in life. Rod tells Liz to face the fact that she is not that special. (Reprise: MILLIONS OF PEOPLE LIKE YOU).

After a Liz’s singing competition, Len and Liz’s relationship is at breaking point so she decides to break all ties (WHY DON’T YOU SAY TO ME) Liz moves in with her mother for her last few days in Melbourne. Mum offers Liz some homespun motherly advice… and that’s – ‘Get married before you’re too damn old and stop talking to yourself and never mention Audrey Hepburn again.’  My Biological Clock  So, with many questions about love, marriage, family and Hollywood… Liz decides that maybe it’s time to grow up.

Rod her therapist is the next relationship to bite the dust. Rod tells Liz during their last therapy session, that all the answers are inside of her and that life is never what we see on the silver screen. Liz kisses him goodbye, knowing he is a good man and leaves with one thought in her mind… to rid herself of Audrey Hepburn’s constant chatter in her head once and for all.

Expecting a battle of the minds, Liz is surprised to find Audrey Hepburn is packed and ready to go. The two old friends hug and say their goodbyes. Audrey disappears as if by magic, back into the world of movie marathons and Hollywood make-believe. Audrey’s parting words are as Eliza Doolittle, “Now common drover move ya bloody rear, ya got a train to catch.” Dad arrives to take Liz to the train station. He notices she has grown into a strong independent woman and believes now, without Audrey and in a good mindset, she can do anything her heart desires. Dad is proud of her, even of what she wears. You Stunned Me .

Flinders Street Station under the Clocks – Liz waits for a train to Perth. Just as she is about to board Len arrives with a suitcase. Liz tells him that Audrey Hepburn is gone for good! They kiss in the busy train station as millions of people walk by. Not A Day Goes By . Liz suddenly remembers her diary and all the notes she’d taken over the last year. She has recorded everything. Liz takes out her notebook and starts to write: AUDREY HEPBURN AND I CONSIDER OUR ASSETS – A play by Liz O’Sullivan.