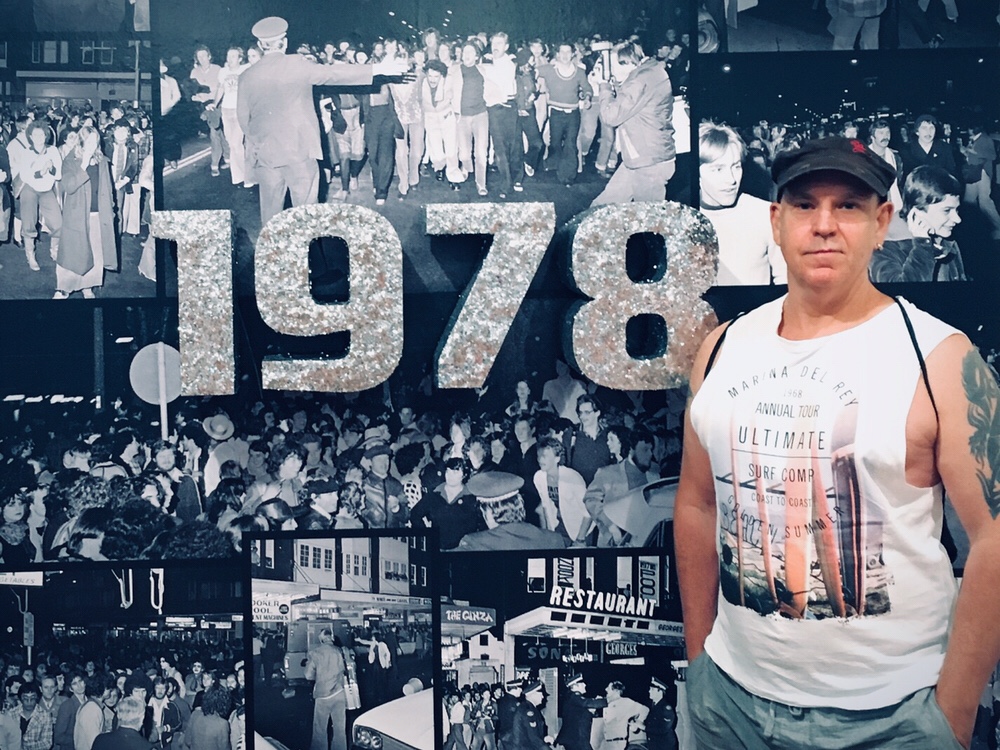 I’m on a Jetstar plane travelling to Sydney for the 40th anniversary of the Sydney Gay and Lesbian Mardi Gras. So, naturally I’m thinking queer history and the evolution of LGBTQ community in Australia. It has been colourful and at times a painful journey, from persecution to liberation. Recently of course, Australians turned out in their thousands and voted ‘YES’ to marriage equality, reminding the ‘NO’ voters including ex-PM Tony Abbott (leading ‘NO’ vote supporter) what a ‘fair go’ really means, and possibly also redefining exactly what it means to be a ‘dinkum Aussie’ in modern terms. It was also a joy to learn, so many heterosexual Aussies believed in the power of love.

Having grown up a Sydneysider, the history of that 78ERS is well known to me. In fact, I can’t think of the Sydney Mardi Gras without remembering the efforts of the men and women that paved the way for the liberal minded country we live in today. I believe that message of love started way back in 1978 at that very first protest march. So, I thought I’d take a moment ‘Before the parade passes by’ to reflect on that single great event in queer history, the one that started the whole damn ‘Mardi Gras Parade’ thing.

Saturday 24 June, 1978 – A buzz was in the chilly night air, as a small group of men and women gathered at Taylor Square to celebrate the anniversary of the Stonewall riots in New York. The bars on Oxford Street were bustling with late night crowds waiting to see what the night would bring. Often that meant heading to one of three key openly gay venues, in particular Cappriccio’s, which was nearby. However, this Saturday night was very different.

As 11pm approached, a throng of people – some walking, some dancing, a few even skipping – marched down towards Hyde Park. Chants of “Out of the bars and into the streets” joined the sound of gay liberation anthems ‘Glad to be Gay’ and ‘Ode to a Gym Teacher’ emanating from the small sound system on the back of a single flat-bed truck, driven by Lance Gowland.

The NSW Police, however, were not in such a joyous mood. Despite the issuing of a permit for the march, the police began to usher the revellers down the street. When the marchers reached Hyde Park, the police confiscated the truck and sound system. The crowd began to move towards Kings Cross. Once there the police swooped in, blocking the dispersing crowd and throwing people into paddy-wagons. The crowd fought back and 53 were subsequently charged at Darlinghurst police station.

Although most charges were eventually dropped, The Sydney Morning Herald published the names, occupations and addresses of those arrested in full, outing many and causing some to lose their jobs. This was the authorities’ attempt to keep the community in line, but Sydney’s gays and lesbians would not get back in line. Little did those witnessing and partaking in the march know, this was to be the start of Mardi Gras and would become a defining moment not only in Australia’s LGBTQI rights history, but a defining moment in the cultural heritage of Australia.

It’s three days now before Mardi Gras celebrates its 40th anniversary and I am at the ‘Mardi Gras’ Museum of Love and Protest’ revisiting not only Mardi Gras’ history but also it’s colourful costumes.

Wandering through the miles of fabric and dresses, outfits, hats and sequins, I am reminded of the hours of love and creativity it takes to be part of the parade. And, I’m also reminded of the many friends lost to HIV back in the 1980’s and 90’s.

For me, Mardi Gras is part of my DNA, I own it. Like my birth place, Sydney, it will always be in my soul. Wherever I roam, I will draw strength from the 78ERS, the men and women who fought the good fight, so generations of LGBTQ Australians could live and prosper in a better world.

The ‘YES’ vote for equality I don’t believe would have been achievable without the 78ERS or Mardi Gras. Sydney would not be Sydney without the LGBTQ community. They go together like meat pie and tomato sauce, and Australians everywhere are all the better off for it.

Note: ‘Mardi Gras’ Museum of Love and Protest’ part of Mardi Gras 2018. Thanks to the National Art School for all the memories.