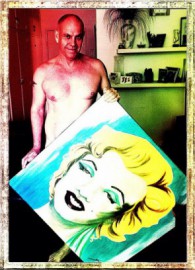 "Art is what you can get away with"

Andy Warhol’s Fifteen Minutes of Fame: In the Raw with writer and director Noel Anderson at the Jewish Museum of Australia

Q: What can the audience expect from your play reading and performance?
A: A Warholsque experience of course! The play has been reworked specifically for the Jewish Museum and includes elements of performance art. I have the entire cast from La Mama’s sellout 2013 production back too. They’re itching to go, ready to turn the audience on to everything Warhol. There’s an element of improvisation now which the La Mama performance never had. In fact, it’s being done probably the way Warhol would have done it himself except of course; he would have his Polaroid camera there to capture the big moments. So, I guess expect to be entertained and educated. You’ll walk away with a complete picture on the man and his art.

Q: What thoughts and emotions do you hope to evoke?
A: This is a true story about the world’s most famous modern artist so I hope the audience feels empathy for Warhol and his family of superstars including Valerie Solonas…who attempted to assassinate him at his factory in the 1960’s. Of course, as well as the drama there’s a lot of humour too, you can’t tell the story of Andy Warhol’s life and not see the humour. So, I hope everyone has a few laughs along the way.

Q: Are there any surprises you can share with us?
A: I think people will be surprised when they find out the reason why Andy produced the Campbell Soup cans series. And, if they don’t pick up the answer during the raw performance then I’m happy to talk about in the Q & A at the end of the performance. Oh, they might be surprised by some of the strong adult themes and I hope moved by poetry of the piece. They probably won’t believe how well these two elements work together. It was a real balancing act when writing it.

Q: What do you see as Warhol’s most significant and lasting contribution?
A: This is probably the easiest question to answer. Andy Warhol documented his moment in time and the world around him like no other artist before or since. Andy Warhol captured particularly the 60’s as it was for the world to remember. You know he packed 612 cardboard boxes, filled them with things from his most unusual life, and then sealed them up. These he called his Time Capsules. I use this idea in the performance. Did you know a box has been opened at the Warhol Museum in Pittsburgh every 21 years since his death? They have lines around the block with people wanting to see what’s in them. That’s forward thinking!

Q: You’re obviously familiar with the ten portraits of Jewish Geniuses, which of these is your favourite choice?
Q: I think it is probably Albert Einstein. I’ve seen a lot of Warhol’s works up close over the years, I’m always moved by the colour and beauty in the work…well, Einstein is different.

Q: Why this choice
A: Well, when I saw it recently at the Jewish Museum I started to feel for a moment I was catching the Stendhal Syndrome. Do you know what that is? It’s a phenomenon that started in Florence in 1817 and affects people only when they view masterworks of art. The disorder causes rapid heartbeats, dizziness and you feel as if you are disappearing deep inside the art work. I’d never felt that before when viewing a famous piece of art…so for that reason I’d have to say Warhol’s Albert Einstein is my favourite work on display.

Q: If Andy was still alive and you could work with him, what do you think you’d both produce?
A: I reckon he’d be helping me finance a touring production of Andy Warhol’s Fifteen Minutes of Fame…and we’d be doing the show in Festivals around the globe…touring with his art work of course, like at the Jewish Museum! Oh, yeah and drinking coke together…diet coke for me!

“Bobeshi did you know Andy Warhol is coming to the Jewish Museum of Australia in May? Well, I’m going…and I’m taking a nice apple strudel”